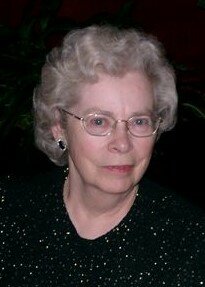 With heavy hearts, the family of Jean Paré regrets to announce her passing at the age of 95 years.

Born in Irma, Alberta, Jean married Clarence on graduating high school and later moved to Edmonton. In 1959, the family relocated to Vermilion where Jean and Clarence owned and operated the Vermilion Auction Mart, then built the Vegreville Auction Mart. Jean excelled at running the office and the coffee shop at each location.

In 1963, Jean volunteered to cater to the 50th anniversary of the Vermilion School of Agriculture, now Lakeland College. Working from her home, she prepared dinner for over 1000 people, launching a flourishing catering operation that continued for more than 18 years. She earned a reputation for great food, courteous service and reasonable prices.

The late 60s found Jean as a single mom with her two youngest children at home. After convincing her local bank manager to lend her the money, Jean bought the Rio Café. She married local electrician and frequent customer Larry Paré in 1968. The two families blended, later enjoying many family trips together.

Jean then sold the café to focus on building her catering business. As requests for her recipes mounted, Jean embarked on a new career at the age of 53 – that of a cookbook author. With the support and encouragement of her family, her Company’s Coming Publishing Limited went on to sell 30 million cookbooks over 30 years. Her golden rule? “Never share a recipe you wouldn’t use yourself.”

In 2005, Jean moved to Edmonton to be closer to her children and the family publishing business, before it was sold in 2010.

The recipient of many awards, including the Queen Elizabeth II Golden Jubilee Medal and induction into the Junior Achievement Alberta Business Hall of Fame, Jean was appointed Member of the Order of Canada, her country’s highest lifetime achievement honour.

Jean’s legacy is that of Canada’s most loved cookbook author. To her children, she will always be Mom.

In lieu of flowers, donations in memory of Jean Paré may be made to Win House, providing safe refuge for women and children (winhouse.org). For sharing condolences and memories or to access a livestream broadcast of the service, visit creechslakeland.com.

Share Your Memory of
Jean
Upload Your Memory View All Memories
Be the first to upload a memory!
Share A Memory